Location:
,
Although not yet confirmed, the shoes you see above could very well be the 3rd James Harden signature with adidas, the Harden Vol 3.The supposed adidas Harden Vol.3 is shown in several different colorways. The construction of the shoe has it comes dressed in a mesh upper supported by the welded overlays. If you take a closer look, you will see that the Black and Pink pair differentiates itself by coming with a leather upper opting for more of a off-court look.  Additional details on the model include the leather tongue tab housing Harden’s logo, an elastic midfoot strap with Harden’s signature, Three Stripes branding on the heel, a roman numeral “XIII” (Harden’s jersey number) and last but not least, a full-length Boost midsole down low.
Nike Air Foamposite Pro model is receiving a new “Gym Blue/Neptune Green” colorway for the kids, releasing in four different sizings of GS (grade school), PS (pre-school), TD (toddler) and Crib. This clean colorway features a white leather upper with “Gym Blue” at the lace eye-stays, tongue tab, ankle collar and outsole, while a touch of “Neptune Green” visits the inner lining. Red embroidered mini Swooshes appear at the forefoot and heel (for the larger sizes), while a tonal white Swoosh lands on the quarter panel area.
Simply writing about Kobe Bryant is a hard task to do — very little able to truly sum up the impact he had on the world of basketball, sneakers, and culture in general. But with such a loss, it’s as difficult to distill grief, with many looking to celebrate the legend’s life via his line of eponymous Nike silhouettes. Instantly cleared out by way of the brand’s webstore and adjacent retailers, almost every current Kobe 5 Protro was gone and put on the contentious resale market, putting the Swoosh themselves in a tough spot as far as posthumous releases go. They postponed the championship-inspired colorway originally set to go live the week news broke and radio silence followed thereon; but after a “Kobe 5 Protro Lakers” scheme hit All-Star Weekend, certain retailers were listing a March release date — some overseas shops apparently already having them up on shelves. And as they’ve just recently appeared via official images, it is likely we’re actually nearing an official release replete with the Black Mamba’s elegant signature and Purple/Gold colors.
Freddy Krueger Hits the Hardwood,Everybody loves a good villain. This custom Nike Kyrie 5 channels the one and only Freddy Krueger from the famous Wes Craven film A Nightmare on Elm Street that debuted in 1984.The pair portrays Krueger’s attire with the red and green stripe found across the upper in combination with the splattered blood. Not only is the pair spot on to its inspiration, but the background gives the perfect eerie vibe to complete the shoe’s inspiration.Take a look at the pair below, and be sure to follow the artist behind this Kyrie 5 here for more custom sneaker content.
While most align Oklahoma City with the earliest stages of Kevin Durant‘s NBA career, the infancy of his leap to the pros after one year at the University of Texas was spent in Seattle. Before the Supersonics moved to Oklahoma, in 2008, Durant laced up the same glowing hues Gary Payton and Shawn Kemp once did.Nike pays tribute to Durant’s time in the Emerald City with a budding KD 11 PE. Dubbed the “Seattle Blends” edition, the pair was produced with tonight in mind, as Durant and the Warriors travel to Seattle for a preseason game against the Sacramento Kings.The shoe was first seen on Seattle Storm forward Breanna Stewart back in June. Durant will lace up the shoe tonight in the city that drafted him. This player exclusive isn’t expected to release at retail. 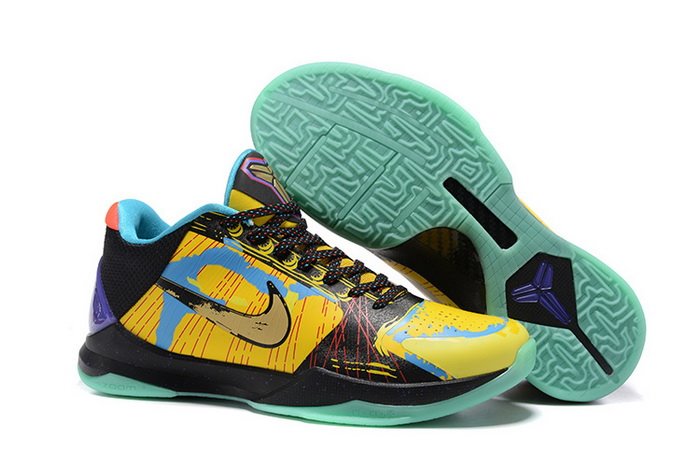