"Akshay Kumar is a big star. I am nobody compared to him," says Muammar, who makes his Hindi film debut with Dobara. The actor of successful Pakistani films like Deewane Tere Pyaar Ke, Choodiyan, Yeh Dil Aap Ka Hua will costar with Jackie Shroff, Mahima Chaudhary and Raveena Tandon.

When pointed out that he was going to act with Akshay Kumar's ex-girlfriend, he declares, "Please don't make controversies out of nothing. I am here to act in a special appearance."

Incidentally, Muammar is the son of former Pakistani cricketer Shafaqat Rana, who played in the late 1960s.

Muammar used to play cricket too at college. But, he says, "One day, former cricketer Mohsin Khan told me I should try acting. I was hesitant, but later, I agreed. I don't really know what motivated me [to get into acting]. But if it were not for Mohsin Khan, I think I would never have become an actor."

He has the highest praise for Hindi films. "Technically, Indian films are far superior. Also, Pakistan film budgets do not stretch beyond [Pakistani] Rs 10 million. But things are changing now. New people are entering the film industry and they want to make a difference. We will also soon have multiplexes in our country to bring in better crowds. I hope we catch up on multiplexes like India has."

He says Pakistani Punjabi films are better than Indian Punjabi films -- one area that 'Pakistanis are ahead of Indians'! He explains: "Yeh Dil Aap Ka Hua was released in London and America in 2002. It was received well. For the first time, we felt we could make a difference on an international level. I hope that trend continues."

Though, he adds, "We are good at regional Punjabi films, but when it comes to Urdu films, we are nowhere near Indian films."

Earlier, Shaan, known as Pakistan's Shah Rukh Khan, was disappointed at the lack of awareness that Indians have towards Pakistani films and actors.

For his part, Muammar is pretty matter-of-fact: "Indians don't get Pakistani channels, so there is no way they will recognise me. Every Pakistani home has cable television and everyone is aware of Indian stars.

"In the last two days, I have changed three hotels, but there is no Pakistani channel being aired on your television channels. No wonder your people are ignorant about our films," adds Muammar.

Muammar offers a little insight into the censors in Pakistan, Muammar says, "We are more stringent compared to Indian censors. Vulgarity is a complete no-no in Pakistan. But nowadays, we do allow rain songs and that romantic stuff. Let me add, though, that I don't do that stuff because I feel out of place doing those scenes. I also have a family and a four-year-old daughter who watches my films -- I cannot do those roles. So I simply refuse them."

He believes that the days when Pakistani actors like Nadeem and cricketer-turned-actor Mohsin Khan failed to make a in the Indian film industry are gone: "Times are different now. In those days, there was very little media exposure. I am happy that today, I will get a lot of exposure thanks to the media. I only hope people in India like my role."

Muammar confesses he wants to meet Dilip Kumar: "He is the greatest Indian film actor. I hope to meet him during my visit. The last film I saw was Shah Rukh Khan's Devdas on DVD, but I didn't like it much. I guess it was because of the DVD print. I wish I had seen the film on the big screen."

Location:
Pakistan, Pakistan
momi is cute yaar and he is a gud actor too i like him 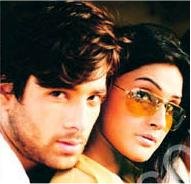 How did you come to that conclusion ?

May be you should read his interview again !
Posted 22 Aug 2004
charizmatic says
charizmatic