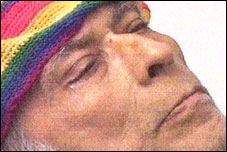 LAHORE: Pakistan’s one of the leading stage and film comical actor Rangeela, died today after a protracted illness.
he was under treatment at Sharif Medical Complex since six months due to liver failure.

The versatile personality has several Urdu and Punjabi hit films at his credit, while besides an actor he worked as a talented storywriter and singer too.

Location:
Pakistan, Pakistan
he was such a talented person and one of my favt actor what a gr8 loss

Location:
United Kingdom, United Kingdom
Very sad news about Rangeela just seen it on GEO news. Was a brilliant actor and also directed some great films especially in the 1970s.

Legend Rangeela was one of the most popular Lollywood stars. He had fans across the globe including heads of states, politicians and people from all walks of life. His death has been widely condoled. The artiste community has termed it as a great loss and end of an era in which he and other stars like him including Munawar Zarif ruled the silver screen.

Sangeeta was all grief and sorrow. "Comedy ka ek baab khatam ho gaya hai," she said, adding that actors like Munawwar Zarif and Rangeela aren't born everyday. "He is known best for his comedy, but I believe he was an all-rounder. He could make people laugh as well as cry."
Sangeeta remembered the last time she worked with Rangeela, "It was a for a film that I was directing, about ten years back. Rangeela was a very close friend of mine. He would share his little, little problems with me, and vice versa."

Later, she said that she hadn't a chance to work with Rangeela on a film, and the latter got very seriously ill, but she "never lost touch with him.

"He was a great human being, besides being a great actor. He raised an equally great family. I feel there would be very few daughters like his who religiously looked after him all throughout his illness."
Deeply disturbed Shahzad Rafeeq said, "Artistes like Rangeela are born once in a millenium. I worked with him for many years and found him to be a very helpful person.

"Sayed had made many films on social issues which became very popular nationwide. It's not easy to make people cry and laugh at the same time and Rangeela had the ability to do that." Talking about his personality, he said, "A brilliant artiste who could make people laugh cannot be a bad person." He lamented that devoted artistes like Rangeela are no longer coming into the industry.

Ijaz Durrani, who was unaware of Rangeela's death, became upset after hearing the news. "He was a self made man who rose to become one of the most successful actors and filmmakers in the industry," he said.
"Rangeela worked very hard to polish his acting skills and no doubt became a versatile artiste." Ijaz prayed Allah may rest his soul in peace.

Senior artiste Habeeb expressing sorrow and grief over legendary comedian Rangeela's death said he acted in movie Soriya with him. "I cannot forget those moments", he said adding such legendary artistes are not born every day.

He termed him the best comedian due to his witty dialogues. "His spontaneous comic acts would make the people laugh to their hearts content.
Habeeb said many artists try to imitate him. "Rangeela was a very close friend . He shared all his problems with me," he said.

Senior cameraman Nabi Ahmad, who saw Rangeela's rise as an actor and filmmaker for said that he had never seen more hardworking and devoted showbiz person like him.

End of a chapter

Death of legend Rangeela on Tuesday evening has left a vacuum in Lollywood. He entered the film industry as a painter of movie billboards but through consistent hard work and some luck became the first comedian hero and one of its most popular stars.

Muhammad Saeed Khan (Rangeela) made his cinematic debut in 1958 film 'Jatti' with stars Musarrat Nazeer and Sudhir. He had made his mark in the film industry and went on to pick one success after another. Spurred by his success as an actor he moved to direction in 1969 by making super hit film 'Diya aur tufaan' under the banner of Rangeela Productions.

What was the secret behind Rangeela's success in the film industry? There can be no one straight explanation. His acting talent continued to evolve and over the years he emerged as a versatile actor. His teenage interest in bodybuilding later paid off. He face features and body needed simple movement or gestures to make audiences roll with laughter. His grave voice and gestures used to create comedy won him a whole generation of fans. His contemporaries Munawar Zarif and Lehri had their own styles of comedy.

Rangeela's style of comedy still serves as an inspiration to new artistes. India's most successful comedian in recent years Johnnie Lever copies him.
He was ingenious and pioneering in many ways. He always tried to make interesting moves while acting that were never part of the script or screenplay. It was not just the funny characters that won him fans. He moved the audiences in his tragic roles as well. He versatility as an artiste was thus successful in making people laugh or weep. His role in 'Insaan aur gudha' remains memorable. In 1973 he made Urdu version of 'Hunch back of Notre Dame' - 'Kubra Ashiq', which failed to click. He filled in the lead role of Anthony Quinn. But he did not lose heart and went on to make the hit 'Rangeela aur Munawar Zarif'. This film was followed by two other hits 'Manji kithay dawan' and 'Parda na uthaao'. He played three roles that of grandfather, father and grandson in the latter film. The film 'Khubsurat Shaitan' in 1993 was his last film as director. Sajjad Ali's directed film 'Ek aur love story' in 1999 was his last movie as an actor.

Rangeela popularity did not just rest on his acting talent. His singing talent was also highly appreciated. His forte was tragic songs. He moved the listeners with the pathos in his voice. His songs 'Ga meray munwa gata jaray, jana hai hum ka dooor' of film 'Diya aur tufaan', 'Tut gai ajj meray dil day taar' of 'Do Rangeelay and 'Yahan kadar kaya dil ki hogi, ye duniya hai sheesha garoan ki' are golden hits. He was also admired as a lyricist. Rangeela won five Nigar Awards for best comedian. He also bagged the Nigar Award for best screenwriter in 1970, best director award and best storywriter in 1983. But his recognition as artiste came from his mass popularity, which was unprecedented as it spanned over four decades.

When he was under treatment at hospital people from all walks of life would come just to shake hands with him and pray for his early recovery. May God rest his soul in peace.

if i am not mistaken, is he that funny guy who used to come i movies? i thought he was already dead

if i am not mistaken, is he that funny guy who used to come i movies? i thought he was already dead