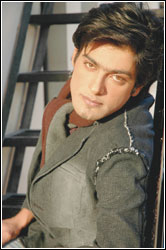 Let’s face it. Pyar Hi Pyar Mein and then Pehla Pehla Pyar couldn’t do anything much for Ali Tabish in terms of a debut and second venture, respectively. But what he did gained in abundance, he says, is perhaps experience and recognition for which others like him have had to invest years of hard labour and endless struggle.

It’s no big secret that Ali’s striking good looks and earlier modelling assignments were what got him initially registered as one of the most eligible candidates for Fahim Burney’s Pyar Hi Pyar Mein: “While flying to Karachi, Moon (of Depilex) introduced me to Faheem who was on the same flight. He told me about his film and offered me the chance to play the lead role,” he says matter-of-factly.

To find out how the experience has been so far and what expectations Ali Tabish now has of the film industry, Images caught up with the tall, dark and handsome actor recently in Lahore.

Ali Tabish’s metamorphosis from a boy-next-door to a self-confident leading man started as a fashion model. “My friends would tell me that I have a good face and height but the thought of making a career in showbiz never really occurred to me. It was only when I got injured during a cricket match and the physician advised me bed rest that I took a friend’s advice and tried out for a less strenuous exercise such as modelling. I submitted my portfolio at Nabila’s modelling agency after which I was called for an assignment. But it was Khawar Riaz who helped me take up modelling on a more professional level. During that time I did a lot of ramp, shoots, ads, etc. But then I had to take a break for studies.”

‘Interference in the director’s job is akin to killing him and his talent. In order to accommodate the producer’s demands he would have to compromise on several issues and this results in a sloppy and inferior production which is the case these days,’ says Ali Tabish

Simple and straightforward is the impression one gets of Ali Tabish while meeting him for the first time, while talking to him makes one believe that nothing is as complicated as it seems. But both the directors he has worked with so far have been new to films and largely unfamiliar with the norms of film-making. Wasn’t he hesitant about having his career in the hands of those who were alien to the art of film-making themselves? “I didn’t plan anything. I just did what came my way. I was satisfied with the team even though it was a new one and the fact that my character was a powerful one. People expected television directors such as Faheem Burney and Asif Ali Pota, who had announced their big-screen projects at that time to bring a much-needed positive change and save the film industry from further deterioration. With all this going round, I found it a rather safe platform.

“I still think it’s too early for the audience to form an opinion about me as I’ve yet to prove myself in films. I have worked painstakingly to make sure from now on that whatever time I invest in a film is substantially sound and potentially rich. My first film couldn’t meet viewers’ expectations but it was my debut and it helped me gain experience which, in turn, helped me understand the medium of film better,” he says.

Ali’s debut received a fair share of publicity from print and electronic media. The music was good the quality of the print was refreshing, even though it failed to click with audiences. “I think the director wasn’t able to maintain his grip over the subject. So it turned out be a filmi drama while drama and films are two different things which follow a different tempo. Directors like Syed Noor, Sangeeta, Javed Sheikh and Ajab Gul know the level of cadence required in a film to make the viewer remain glued to the seat till the very end. But due to lack of experience, Faheem couldn’t maintain the flow of his film and thus the disappointment.”

In his first film Ali came across a team that was totally new to work with, specially the co-stars Nisha and Aanchal. On the other hand in Pehla Pehla Pyar he was paired with two of Lollywood’s most sought after and bankable names — Resham and Zara Sheikh. In addition to this, veteran actor Nadeem also appeared in an all-important role. “The experience of working in Pehla Pehla Pyar helped me understand what acting truly means. It made me realize that acting is a two-way process as it is all about action-reaction. In Pyar Hi Pyar Mein that was missing. But in this process, I have learned a lot from my senior colleagues and if I have performed well in Pehla Pehla Pyar, it’s because they delivered such a performance that I could react likewise.

“While the first half of Pehla Pehla Pyar was reasonably good, in the second half Mubasher Lucman lost control of the film and it was obvious that he stretched the duration of some scenes to cover the running time. Moreover, the audience couldn’t relate to the climax of the film which they found quite unrealistic. Treatment of a film as a film is what our directors have to address, especially those who are making a transition from television to the big screen. If we learn anything from the past it’s that the directors who kept their television theory before them as a standard rather than understanding film ethics ended up falling prey to stereotypes,” says Ali Tabish.

He says that Pehla Pehla Pyar was ready almost a year-and-half-a-half ago but the continuous delay in its release considerably reduced the interest of the people. “Even later when the rushes of the film were aired on TV, the mega-star cast of the film, a pleasant soundtrack and beautiful cinematography kept the people waiting for the film but unfortunately the film-makers couldn’t cash that interest due to the bad marketing and unjustified delay. Sometimes cricket matches became the reason for its release and at other times the local bodies election were said to be the cause. At one stage they publicized the releasing date which had to be cancelled as Reema’s film Koi Tujh Sa Kahan was scheduled for release at the same time,” he says.

At a time when shopping plazas and malls are rapidly replacing cinema halls and people are generally supporting the exhibition of Indian films in Pakistan, Ali has a firm stance on the issue: “I’m strongly against any such thing. If Indian films are allowed to be shown in Pakistan then our own industry will be completely wiped out and the work force left unemployed. However, I don’t mind people of the both sides working in each other’s films as it would bring about improvement in the areas where there are certain deficiencies.”

Having a fixed image is what Ali recoils and rates as a career risk for an actor. “I want to be an all-rounder. I don’t want to be labelled or type-cast as an actor. Although newcomers can’t afford to be choosy, that is certainly not the direction I’m headed towards.”

For film actors who opt for television, the move is usually seen as a potential threat and an end to their big-screen status. Not surprisingly, many film stars work for TV in the later stage of their film careers. But Ali negates the argument. “I don’t think that it really contributes to any major difference. Today, television is a much more strong media than films in Pakistani society. For me, television is an institution that helps me learn and hone my latent skills as a performer,” he says.

Ali says he holds film producers entirely responsible for the distorted image of cinema in Pakistan. “Their unnecessary intrusion and domineering stance has multiplied the problems facing this industry to no end. Production and direction are two utterly diverse jobs but that is something they stubbornly fail to realize. At times t
Posted 29 Mar 2006
MR NICE says
MR NICE

Location:
United Kingdom, United Kingdom
Recently I read that he has decided to do a Punjabi film and for that he is putting on weight. I do feel sorry for him but he is not the only one.

Nearly all the new faces which have come into the film industry in the last few years have failed to make the grade.
Posted 29 Mar 2006
STANDARD says
STANDARD

Location:
Pakistan, Pakistan
well putting on weight wont help him much the only thing he needs is an urgent acting course as simple as that
Posted 29 Mar 2006
valandrian says
valandrian