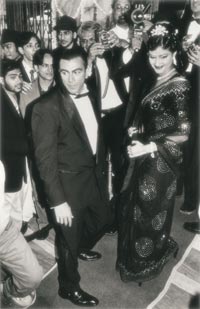 We all remember Francis Ford Coppola’s The Godfather as a classic in its own right. Now we have an Indian-cum-Pakistani version titled Godfather — The Legend Continues.

What sets this film apart from other productions is the fact that it is the first time that such a film featuring top Pakistani and Indian actors and technical crew, with the film officially being released in the subcontinent simultaneously.

Vinod Khanna essays the role of Michael Corleone and like in the Coppola classic; he is trying to legalise his gangster business. The plot is like any gangster movie ever made with blood and gore, drugs, violence, car chases, helicopters, fancy cars, rivalries, big houses and even bigger bucks, murder, revenge, family ties, jealousy and saucy dances. However, the director Hriday Shetty insists that his film has an original screenplay and is not a copy: “Anyone who makes a gangster film will be inspired by Coppola’s The Godfather. After all, it’s the mother of all gangster films. I’m also inspired by The Sopranos which is the best gangster tele-drama that I’ve seen,” he was quoted as saying.

In short Godfather – The Legend Continues has all the trappings of a gangster flick — a total masala, Bollywood-style, with item numbers et al to suit desi audiences. So how does it appeal to Pakistanis? For the frontbenchers it’s a hoot-a-minute caper and for the masses it can be termed as paisa wasool, but for people like me it is riddled with clichés.

First let’s talk about the ensemble cast. Vinod Khanna, a former film star and now MP in real life, essays the character in reel life of Abdullah Khan aka Anndata who runs a successful construction business but is actually an underworld don. Actor-turned-social activist Nafisa Ali, who plays Khanna’s wife, Salima, has a strong presence. She is no doubt a most charming and beautiful woman but somehow playing a gangster’s wife does not suit her. Shakir, the temperamental son constantly vying for his father’s love and attention is played to the hilt by Arbaaz Khan.

Hrisitha Bhatt plays Sana, the daughter who despises having her father’s name as she hates what her father does for a living. Hrisitha has the meatiest role in the film among the other actresses. She not only has more screen space but gets to do action sequences as well. As for Preeti Jangiani playing the adopted daughter, she is the ever-obedient soul who scarifies her life in order to save that of her brother’s. Since Preeti didn’t have much to do in the film, the scene mentioned earlier can be called her ‘moment of glory’.

And who is this middle-aged Aslam Khan who plays Ali, the ever-conscientious and obedient adopted son of Anndata who gets the gaddi once the don retires? What can one say about his acting talent as he was quite mechanical and expressionless. He didn’t know romance, action or melodrama — a prerequisite for his pivotal role.

So how did the Pakistani side fare? Mehmood Akthar as Anndata’s uncle and confidante and Shafqat Cheema as the menacing rival Khalid had etched-out meaty roles. The same, however, cannot be said about model-turned actor Mekaal in the role of Preeti’s husband who, in the beginning, is just a silent observer and gets to mouth dialogues and do some action right at the end of the film. And whatever happened to Ajab Gul who plays Abid, the righteous cop and love interest of Hrisitha? His character suddenly disappears. Also, at his age, he wasn’t looking the lover boy that he was trying to portray. The guest appearance by Atiqa Odho and the wee bit extended role of Ayub Khoso was executed as required.

Wait. How we can forget Meera? What was she doing in the film? Her character as Arbaz’s abused wife seemed sidelined in the film as she didn’t have much to do. No Lollywood-style loud dialogues or item numbers. Poor Meera! ‘I want to dance and do saucy number’ was writ largely all over her face. In retrospect, it seems that the Pakistanis didn’t have much to do in The Godfather — The Legacy Continues at all.Talking about dance, the two item numbers were peppy with loud music and lyrics that I, for one, could not decipher. Amrita Arora’s number went something like Everybody down, down while Kim’s number… well I could only get the impression that it was about being betrayed by one’s own blood. The odd thing about the song was that Kim was only seen in a few frames. Maybe it’s a case of not being paid well hence she left it midway? What say Mr Shetty?

Overall, the film will appeal to the general public who like large doses of glamour, action and saucy numbers. As a matter of fact, The Godfather — The Legacy Continues has been mellowed down by showing the Muslim family praying, fasting and celebrating Eid to suit the Pakistani audience. Had it been a true blue Hindi movie it would have been much more outlandish in every sense. As for comparing it with an original, Coppola’s The Godfather or any other gangster movie made in India or anywhere else for that matter, big mistake!