Neha is no more a sex-kitten

Location:
New Zealand, New Zealand
She's won many hearts when she made an appearance as Julie but that was eons ago. Today, Neha Dhupia is on the path to re-invent herself. The actress who once claimed only Sex and SRK sell in this industry is somehow not-so-interested in skin-flicks herself.

These days she is shooting with Abhay Deol for a 'different' film ‘1:40 Ki Last Local’ in which she is performing a middle class girl returning home by train after attending a friend's engagement, when the story takes a twist.

As Ayesha Shaikh of Siskiyaan she fights the injustice done to her during the riots. Just-another-sex-kitten till a few days back is also doing a cameo in Priyadarshan's Garam Masala starring John Abraham and Akshay Kumar.

"I couldn't refuse Priyan as I like the role very much. As for Siskiyaan and 1:40 Ki Last Local, it's with the film like I'm trying hard to prove myself as an actress," she gushes. 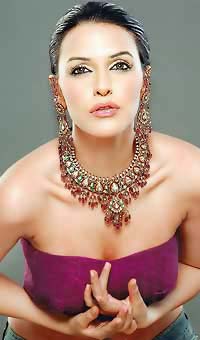