Story: Amna is a very rich girl...as his father ( talat hussain) wants to marry her with a rich boy...while talat's mother is very different to his son..she says guy would be handsome and caring...talat's son ran away with a beautifull girl..she wasnt even a rich girl..talat doesnt want to let happen with amna haq..Humayun saeed is a poor guy...his father and mother died in a accident,,,his friend ( ismail tara ) has brought him home...one day while joging humayun sees Amna haq...he sees her...he falls in love with her,,,,ismail tara says you have to be rich and modern to marry her,,,humayun thinks how can i be rich and modern...Ismail tara goes to their home..he listens that Talat hussian's friends son is coming from usa to pak ( Ahmed Butt)..talat hussain sees him after 12 years....talat wants to marry her daughter with ( ahmed)...ahmed and amna haq spend their school time together,,,so ismail tara tells humayun saeed...that ( ahmed) is coming...humayun has got an idea in his mind,,,,when ahmed arrives at airport...Humayun saeed put a gun in his bag...Ahmed got arrested..Humayun replaces him....humayun saeed goes to amna..there goes they love stories...suddenly comes ahmed butt's father..so then he says to talat hussain//where is my son...talat hussain confused..whats he talking abt...ahmed's butt shows foto of ahmed...humayun saeed gets trouble...ahmed butt says to talat hussain..i didnt want to hurt you ppl...i had did everything just for her...he tells that ahmed is in jail...amna haq hart has broken coz of humayun's lie...then talat wants to marry her daughter with ahmed very soon...humayun saeed plans to go to new zealand..he wanted to start buisness...he says to ismail...if i stay here..her memories will kill me..its better that i should leave...other side wedding of amna haq with ahmed...ismail tara calls amna haq's mob..suddenly pics ahmed up...ismail tara saya go and stop him he loves you very much..so much that could never loves you...ahmed goes direct to airport...so he sees humayun...humayun saeed congrats him...ahmed said "No...i know i cant make her...coz i m not the right man for her...other side...well amna is thinking of humayun saeed...she doesnt even know the man who is sitting with her is humayun saeed...when she looks to her...humayun saeed winks...brings smile on her face...their paresnts were agree...coz ahmed told them the story....then they live happier

hey bro its a gr8 story

Ali's popho heard that and then yelled at Momin,"Batameez!, Aisey nahi kehtay!". Ali face turned red with anger and embarassment. Iman just turned away and said nothing. Then Ali's popho turned to Ali while everyone was watching. "Yeh Momin toh mazaak kara hai hanah?",and Ali said yes(when he really did tell him...). Then Momin was like "Haan! Inho neh kaha tha!!!".
Ali's popho told Momin to shut up and told him that her best Ali couldnt ever say anything like that. Iman was closley watching all this. Then Ali's popho stricltly told her to go back to work.
Good thing that Ali's parents werent around, they were in the other room at that time. Only his cuzins were in the Sehain that time. That night, Ali couldnt sleep and he kept thinking about the chaos that occured that night.

The next morning, Ali awoke but was still on his charpaee. He then heard his popho telling his grandma about what happened last night. She also told his grandma that she has noticed Ali and Iman looking at each other all the time.
Then he heard his grandma say "Lakta hai keh Ali interest leh raha hai Iman per...Iman ko nikalna paray ga"...

seems that sad part is going to occur now 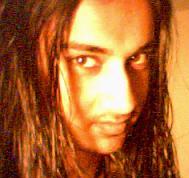 Ali heard that and suddenly felt a deep shock inside his heart. He just stayed quiet untill his grandma and popho went back downstairs. Then his best cousin Imran (Imran Abbas) entered his room. He knew that Ali liked Iman and he was cool with it because he himself have had expirience with love. Ali told him what happened the other night and told him that his grandma might kick Iman out of the house. Imran cheered Ali up and told him to forget about her now, since he only has 2 more days left before they go back to America. Ali said he would try to forget about her now.....

Location:
Netherlands, Netherlands
goodie..keep it up

nice blasta
hmm waiting for the next one...
Posted 11 Feb 2005
Bush_Blasta says
Bush_Blasta

Then Ali went downstairs for breakfast. Everyone was in the tv room and Iman was by herself in the sehain drinking chai. Ali told himself to not even look at her and he tried to ignore her, although he still loved her. Ali quickly got his plate(which was RIGHT next to Iman) and then left to the tv room. Iman looked at him as she was sort of surprised that he didn't look at her. This happened for the rest of the day, he tried not to look at her. And he stayed upstairs in his room most of the time. Then it was nighttime and he slept byhimself in his room.
Iman started to feel a little lonely so she also went to sleep.
That night Iman came in Ali's dream again. This meant that Ali still hadn't forgotton her and he still liked her.
That same night, Ali came in Iman's dream to! So she liked him also.
The next day was the last full day in Pakistan for Ali. In the morning Ali seemed a little depressed. Ali was having breakfast and was talking to his pophos. Then Iman came down. Ali wondered if she knew that he only has 1 more day left to stay in Pakistan.
Then Ali said to his pophos and his grandma "Haii, bus ab ek din rehta hai jaane ka".
Iman heard that and felt a DEEP shock

inside her heart. But she continued washing the dishes.
Then Ali's popho asked Iman if she wants to stay and work here or leave and live with her mom again in the village. She said she wants to leave...

Location:
Netherlands, Netherlands
sad..keep it up